Jessica Mulhbier has established a Saturday morning routine: She heads to a yoga studio for a 9:30 a.m. yoga class, followed by brunch. She then heads over to grocery shop at the South Melbourne Market.

With dozens of vendors selling fresh fruit and vegetables, Jessica makes her way through the aisles, embracing the market’s special ambience and atmosphere.

A Torontonian now living in Melbourne, Jessica is completing a Master of Media & Global Communication at the University of Melbourne.

As she completes her year-and-a-half-long course, Jessica has also taken the opportunity to discover what Australia has to offer to meet her expectations for a true passion – health and food.

After years of trying to develop a diet and lifestyle that works for her body, Jessica is now a self proclaimed holistic health nut after comfortably shifting to a natural, holistic, and whole foods lifestyle.

“My approach to food is quite simple: fresh, wholesome, and real. I treat my body as the temple it is and fuel it with healthy and honest ingredients,” she says.

Chronicling her experiences on her blog at Forever Addicting, Jessica has outlined her food discoveries in Australia. She recently caught up with OzTREKK to talk about how she fulfills her holistic lifestyle Down Under.

Since arriving in Australia in January, Jessica says she’s had to adjust her regular diet, but it’s mostly due to product availability in Melbourne. “While Australia supports local farming and ingredients, many leading North American health brands are not yet available,” she says.

For instance, almond milk is expensive and hemp seeds are hard to come by. But the limitations have also resulted in benefits.

“Because Australia rarely imports produce, I have the pleasure of eating more local,” Jessica explains. “Now that I’ve discovered the various farmers markets and smaller health food stores, I’ve gained new knowledge and a comfortable routine for my lifestyle.”

She’s also tested out Australian-produced foods, giving her the chance to compare them to their Canadian-grown counterparts. “Organic eggs are awesome in Australia, much better than I’ve experienced in Canada.”

“The yolks are so orange!” she says. “Some not-so-good foods would be fresh raspberries, as they’re small and mold quickly. I don’t think the climate is equipped for fresh berries as it is in Ontario.”

“Australia also doesn’t have an organic friendly grocery store, such as Whole Foods,” she says. “Coles and Woolworths have a large monopoly over the grocery chains in Australia, making it difficult for a small organic grocery store to even survive.”

But with her yoga mat and grocery bags in tow, she’s happy to continue her weekly trips to the market.

“Melbourne has a lovely range of markets, my favourite being South Melbourne Market,” she says, adding how she’s embraced her Saturday morning routine. “The combination can’t be beat!”

Jessica plans to use her Master’s degree to help live out her passion as a career.

“Upon graduation in June 2012, I plan to work in Melbourne as a community manager for Lululemon Atheltica until September, 2012,” she explains. “I then plan to transfer to Vancouver and join the digital strategy team at the Lululemon Athletica Store Support Centre. In addition, I will complete my certification in holistic nutrition and grow a small practice.” 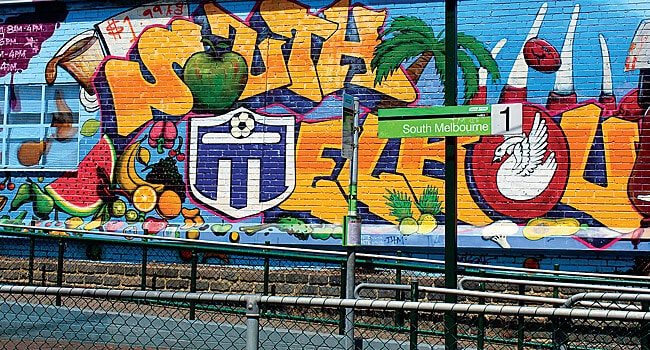 Why a Masters degree program in Melbourne?

We asked Jessica a few questions about why she chose to study in Melbourne – aside from the obvious lifestyle choice that feeds her passion. Here is what she had to say:

“I completed my BA in Media and Information Technoculture at The University of Western Ontario, where I focused on digital media and writing-specific courses. The Masters in Media and Global Communications appealed to me for it captures a global perspective, while encompassing a variety of courses specific to new media, technology, and critical theory. It was a great in-depth continuation from my BA degree.”

“Something about Australia resonated with me… The opportunity to study from a new global perspective excited me, which led me to apply to universities in both Sydney and Melbourne. I chose Melbourne because it has a great reputation for sport and athletics, which falls into my passion for holistic health and fitness. I also liked the idea of completing my Masters in a year and a half, due to the University points system, as opposed to two years.

“First semester was a whirlwind! It was exciting to connect with students and professors from around the world, with different academic backgrounds. Initially, the Australian marking scheme and educational resources were intimidating, but once I grasped a balanced student life and routine the semester flew by, with great success.”

Because Australia is so far away, it can be difficult to visualize the university culture and understand program specifics. To overcome this hurdle, listen, read, and ask lots of strategic questions! Don’t hesitate to set up a phone call with the program coordinator or reach out to alumni students. Above all, don’t be shy to call get assistance from a bona fide education consultant in Canada who specializes in Australian universities who can help you through the application process and lend ongoing support and guidance throughout your experience.

Cathy James,
On behalf of: OzTREKK – Your Canadian Connection to Study in Australia
www.oztrekk.com