West of Veracruz, beyond the coffee and vanilla plantations, the road climbs to the high plateau of central Mexico.

Tlaxcala is where the indigenous natives and Europeans first mixed. Nearby is the city of Puebla, the ‘Culinary Capital of Mexico,’ where their cuisines mixed; it is also where I was born and where I learned to cook.

Long before there was a specific “Mexican Cuisine,” the Olmecs, Zapotecs, Totonacs, Toltecs and Aztecs came and inter-mixed their cultures, customs and kitchens. For thousands of years before the Europeans arrived, before Rome was even a village, a sophisticated cuisine was developing here. 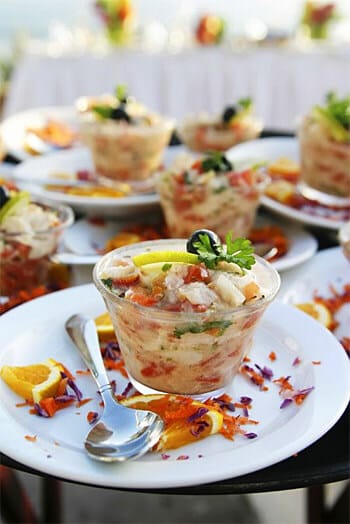 It was based on corn as it still is. In all its variations corn has run through our culture for more than 7,000 years.

We utilize every part of it. The silk is used for a tea and making dolls, the stalks to feed the animals, and husks for wrapping food. The kernels are soaked in water and cooked with lime or wood ashes (enhancing the protein value) and then ground into a dough called masa, to be used in innumerable forms, first of course being for tortillas – a food, an eating utensil and a wrap for whatever it can hold. Masa can be used flat, round, oval, thick or thin. It can be steamed, fried dry or with oil, filled or covered with a sauce, beans, meat, mushrooms or blossoms.

When the Spanish came in 1619, many dishes were accepted and adapted but many more were lost. They came to conquer and replicate the culture and cuisine of their homeland. They had little intention of adapting Aztec cuisine, with its unfamiliar forms and tastes. What is not often noted is that all the forms of Spanish culture came with a strong Middle Eastern influence, due to the Moorish rule of Spain for 500 years.

The most common ingredients for the endless varieties of today’s Mexican cuisine include tomato, onion, cinnamon, tortilla, chiles – including anchos, pasillas, mulattos and chipotles – pumpkin seeds, raisins, cloves, sesame seeds, almonds, tomatillos, oil, garlic and salt. Nearly half these ingredients arrived in the New World with the Spanish.

The Arabic and Persian influence are particularly apparent in the cuisine of Puebla in its use of numerous fruits and spices – such as cinnamon, ginger, cloves, cumin and nutmeg.

In 1863 the French invaded, putting Maximiliano on the throne and bringing a French court to Mexico City. Puebla took in the French flavour, adding a touch of their cuisine to ours and making our sauces, soups and pastries even more complex and unique.

For those interested in culinary delights, from aficionados to serious cooks, the city of Puebla offers a wonderful location for discovering a cuisine far beyond what is normally thought of as Mexican food.

For those a little more culturally daring, there is the city of Tlaxcala (1/2 hour from Puebla), which is rich in history and off the usual tourist route. It is a little-known colonial town that feels like stepping back 50 years into a Mexico virtually untouched by tourists. It is a good location for a quiet base to visit Puebla and then return to the stars in the county night.

The real gourmet cooking here was kept in households for special occasions; it is almost never found in restaurants and nearly lost to the present generation of Mexicans as the culture is changing from outside influences.

But for those who are interested in actually cooking this cuisine there are Mexican cooking schools for a hands-on experience. The wonderful part is that you don’t have to be an advanced cook to learn this type of cooking. Classes can be based on the ability of each person in order to make the techniques simple to learn, but you’ll be surprised how complex the flavors turn out. Although chiles are used, this is not a cuisine that is about hot and spicy (unless you want it to be). The chiles are used for flavors as ancient as in the Aztec and as sophisticated as in French cuisine.

Take the chance to be guided through the preparation of red and green pipian with rabbit or lamb, a subtle almond duck, squash blossom soup or the dessert ‘fiancées sighs,’ with walnuts covered in syrup, lemon and cinnamon. The list is far too long to enumerate. It has to be told in a Mexican kitchen with all its customs and stories.

Of course this area is filled with archaeological sites, extinct volcanoes, mountain forests, hot springs, colonial cities and much, much more to see.

What a wonderful way to spend a week: with others from around the world, glass of wine in hand, swapping tales and hearing stories about Mexico and its culture while cooking and tasting its food.

What a wonderful thing to take home: Mexican cooking to use and enjoy for years to come with family and friends instead of just returning with photographs and trinkets.