Originally the majestic valleys and mountains were inhabited by indigenous Chichimec and Otomi Groups, but in the year 1531 the Spanish arrived. The combination of the natives and the Spaniards gave birth to a state, small in size, but immensely rich in culture, history, sights and landscapes that include grottos, deserts, waterfalls, and forests that a lifetime would not be enough to explore: This state is Queretaro.

Founded in 1531, Queretaro has become “the window into the geographic and cultural diversity of México”. And in 1996 the UNESCO declared the downtown area of the city a world heritage site. All over the state one can see impressive buildings that date back to Queretaro’s past. Los Arcos, the city’s aqueduct from the18th century, is one of the many examples, and like los arcos, temples and grand villas were built by order of the Spanish viceroyalty. Moreover, just 7km outside of the city centre one can find the pyramid of El Cerrito, the biggest one in the central region of the country. 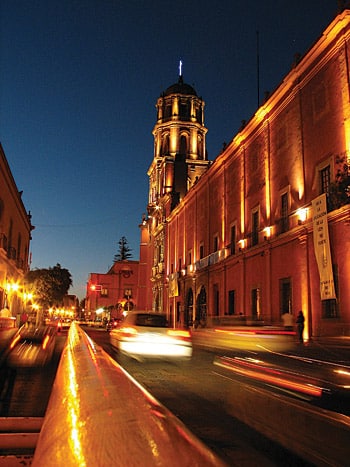 Queretaro has something for everyone. Besides its historic sites, the city offers spas, shopping malls, bars, night clubs, cultural centers, museums, parks, and restaurants where one can enjoy Mexican and international cuisine. With a temperature that ranges from 18-30 C, one can enjoy outdoor activities or simply walk around the city, which has one of the lowest rates of crime in Mexico.

One does not need to have a vehicle to get around as the public transportation is affordable. El Parque Bicentenario is a park just outside of the city but it was so well designed that one can instantly connect with nature there. The park includes a rollercoaster and other mechanical games, a river, swimming pools, lakes, and paths that allow you to venture into the woods.

Queretaro has around thirty festivals in which one can sample and take pleasure in the traditional cuisine. These festivals include Charreadas, Mariachi concerts, parades, and plays to represent the nativity scene. Other celebrations include days to honor saints and other religious figures. One of the biggest celebrations takes place in the month of September. In this celebration the Concheros wear metallic costumes adorned with feathers and dance for three consecutive days. Holy week and day of the death celebrations are especially remarkable because they represent the combination of the old and the new.

EVERYTHING IS CLOSE TO QUERETARO. It is located close to Guanajuato, San Miguel de Allende, Mexico City, and Morelia. All of these cities are full of history, culture, art, and picturesque old buildings.

Thanks to the central location and advanced highway systems, Queretaro is one of the most progressive, innovative and modern states of Mexico and is a key driver of the Mexican economy. Its 18 industrial parks house national and international companies and have been acknowledged as the best industrial centres in Latin America. Moreover, Queretaro is home to the first industrial park of the aeronautic industry in Latin America.

Come to Queretaro and be enchanted by the magical atmosphere!