Ariane Coulombe, from Ottawa, was anything but a homebody. As a child she had lived in Europe and this had piqued her curiosity for foreign travel.

When Ariane was deciding where to study abroad, she researched and found that Berlin was quickly turning into Europe’s innovation hub, with endless possibilities for young and ambitious people. Thus, after spending some time learning German in Switzerland, she decided to apply for a master’s program in International Affairs in Berlin.

Throughout the summer before her program started, Ariane’s excitement grew and she took her preparations seriously, brushing up on her German, and keeping in contact with her university.

Ariane quickly fell head over heels for her new city, which she described as diverse, open, and beautiful. She cautions visitors to not be fooled by the rainy winter, because the city comes alive in the summertime!

Of course, there were a few teething problems. Navigating a new place can be tricky, especially when you’re adapting to speaking another language 24/7. Although it can be hard to get past the fear of making mistakes or sounding silly, Ariane seized the bull by its horns and just went for it. She found that most people were understanding and happy to help her develop her language skills.

Her experience with academics also differed from her undergrad. Her university was very small, so there were ample interactions between the students and faculty. The conversational approach to learning required the students to speak up, which helped Ariane grow in confidence. 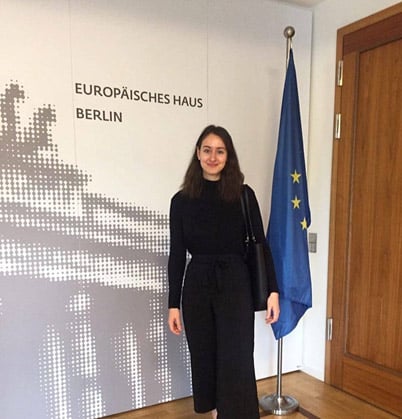 A priority for Ariane was connecting with new friends abroad: “Living abroad allows you to meet so many new and interesting people that can have lifelong impacts on your character and who you are as a person… you can have many homes but the people are what make it special.” She cherishes her memories of exploring Berlin with friends and says that the local people she met helped her discover “Berlin and its secrets in a whole new light.”

Alongside so many others who have studied abroad, Ariane is now eagerly anticipating her trips to reunite with friends all over the world!

Personal development is an inevitable side effect of studying abroad, and it was no different for Ariane. She developed her adaptability, proclaiming that “while planning and having goals is important, so is giving yourself the leeway to grow and learn. Living abroad pushes you in so many ways and requires you to be adaptable and independent, qualities that you will carry with you forever!”

During her trip, Ariane learned the importance of self-sufficiency. When faced with a foreign work environment, with less resources than she was accustomed to, she challenged herself to build her own network.

Her study abroad experience also helped her refine her goals. She hopes that in the next few years, she will be fluent in German and working as a journalist or policy analyst. She also hopes to remain living in Europe!