“I have never been afraid to jump through a new door or experience something different,” says Daniel van Lanen, when he remembers his feelings right before his departure to Germany. His fearless attitude and his thirst for adventure were the necessary approaches for his studying exchange in Germany. He was one of those students who like challenges and who want to experience an enriching time abroad.

Daniel had already been studying for two years at the University of Waterloo, when he decided to spend two semesters abroad. “Basically, I wanted to learn a new language.”

Instead of just learning a new language, he became a different person in Germany: He learned to become independent. He learned to organise his life in a foreign country, in an unknown culture. He learned to think more practically. When he now reflects on his studying exchange, he is certain about one aspect: “In Germany, I learned who I am. Germany was the place, where I grew up.”

Daniel applied to the Technical University of Braunschweig and got accepted. The TU Braunschweig is very attractive – in particular for students following a technical degree program: the university has the oldest institute for technology in Germany. Furthermore, it has a long tradition and is pretty popular with students because it offers its 16,300 students 64 different degree courses. 1,780 students and young scientists from more than 100 countries study and research there. Consequently, one in 11 students comes from abroad. Moreover, the TU Braunschweig maintains partnerships with more than 300 universities all over the world.

Germany is a popular study destination. As most universities are state-funded, students have to pay only the nominal semester fees of about 100-500 Euros (app. 150-750 CAD) per semester. Therefore, the overall expenses when studying in Germany are more affordable than in many other countries. The monthly living costs an international student needs for living is approximately 700 Euros (app. 1050 CAD). This translates to the fact that studying in Germany can be far less expensive than even in Canada.

Right in the heart of Europe

But Daniel had yet another reason to choose Braunschweig: “I wanted to live in a central location. Braunscheig is not only located in the centre of Germany, but also right in the heart of Europe. As Germany has an excellent train system, you can easily go to any place in Germany. You can even cross the border and go by train to European neighbouring countries.”

Indeed, Germany is geographically much smaller than Canada. Numerous European capitals like Paris, Prague or Vienna are only a three-hour train-ride away. Most of the European countries are in the same time zone which makes it easy to visit them. They have also retained their own distinct culture and character. Foreign students are fascinated by the variety of languages, cultures and different ethnic groups within such a comparatively small continent.

“I truly sensed how close everything was, how cultural metropolises, old castles, vineyards and little villages in the countryside are all neighbours. And I was in their midst,” states Daniel, when he remembers his trips across Europe. He took advantage of these short distances and travelled a lot. He visited Amsterdam, Oslo, Barcelona and German metropolises like Munich, Hamburg and Berlin. “I just loved to walk through the historical city centres, as we don’t have pituresque old towns in Canada”, enthuses Daniel.

Germany is at the centre of the action in Europe. “The country itself has so much to offer. In Germany, there are so many opportunities that people don’t realize,” affirms Daniel.
Intellectual events, art, music and literature played a big role in his social life.

Germany has diverse cultural and social scenes. One evening you can join one of the many theatre and opera houses, the next evening you can go partying in one of the numerous all-night discos. And, Germans are crazy about their national sport soccer. Foreign students should definitely take advantage of the opportunity to watch a soccer match; almost every bigger city has its own soccer club which is presented in the Bundesliga.

You can also participate in many other indoor and outdoor sport activities in Germany. Almost everything is possible from iceskating, in-line skating to surfing or sailing. In summer, you can either go swimming in the North Sea, the Baltic Sea, or visit one of numerous lakes which are located all over Germany. Moreover, you can go hiking, for example in the famous Black Forest. In winter, skiing or snowboarding in the Alps are popular activities.

Regardless of the student’s personal preferences on how to spend their free time, there are for sure enough exciting activities on offer in Germany.

What was Daniel’s most impressive cultural experience during his stay in Germany? “To walk through the Holocaust memorial in Berlin and to realize the actual dimensions of the Holocaust was very moving.” Moreover, he was very impressed to see how Germans deal with their past: “Germany has a dark part of its history, but there are very few Germans who shy away from that. Germans are willing to present their history openly. I found it admirable that there were so many Germans who asked my opinion on Germany’s National-socialism and the Second World War.” 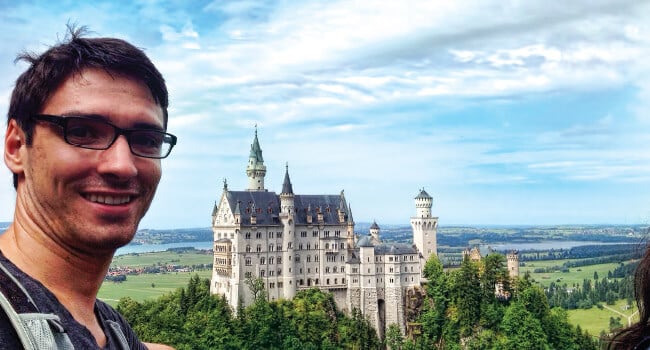 In spite of all these cultual and social highlights, Daniel’s main intention for his studying exchange was to improve his German. He was very rational-minded and focused on the advantages of German in the industrial sector.

As German is the most widely spoken language of the EU, he hopes that his German language skills will be of value for his long-term professional life. The engineering student is aiming for a career in renewable energies, and many chemical firms are German-based. Speaking German is a huge advantage. In addition to his engineering course, Daniel took German classes to reach a higher level of German language competence.

Daniel benefitted from the quality of the higher education in Germany. “I took a lot of interesting courses that weren’t even offered at the University of Waterloo.” Thanks to the broad offer of courses in his field of study at the TU Braunschweig, Daniel was able to accomplish his engineering studies.

In October 2013, he was awarded the W. L. Blitzer-Prize for his outstanding academic achievement and his advanced German language competence. This award recognizes University of Waterloo Engineering students attending an undergraduate exchange program in Germany or Austria. Each year, two students are selected based on their academic success during their exchange program. In addition, both W. L. Blitzer-Award-winners receive a scholarship in the amount of $ 2,500. This money helped Daniel to be able to finance his stay in Germany and gave him the chance to travel.

Daniel has not only been a very successful student who won the scholarship, he has also been working in the Institute for particle technology in addition to his studies. For six months, he gained valuable research experience and earned enough money to be able to cover the relatively cheap living expenses in Germany.

By studying another language and discovering Germany’s culture and history, Daniel’s horizons have been broadened. Spending his third year of studies abroad was mind-opening. His exchange made him appreciate and consider many different aspects of life. “I feel like this studying exchange has helped me to find me,” states Daniel, who is back in Waterloo to finish his Bachelor studies. This year he will graduate. Living on his own abroad matured and strengthened him. He met great people abroad, made friends from all over the world and gained unforgettable experiences. Most importantly, he became more independent and learned to overcome his boundaries. “I reached a level of confidence that I don’t think I ever could have achieved staying within my comfort zone in familiar Waterloo. Germany has made me a better person.”

For more information, contact
the consulate or check on
www.daad.org