Una Trevillion was still in high school when she set her sights on studying abroad.

She knew that travel offered a unique opportunity to expand her horizons.

“I had heard that Lausanne was a beautiful city and having lived in Vancouver my whole life I wanted to see a part of the world that has a lot more history,” she says.

Inside information from those in the know helped her decide on L’ecole Steiner de Lausanne as her destination to learn and travel abroad. “I knew of a few people from my school who had previously done exchanges with this school and really enjoyed their time spent there.”

It was a great choice for her. “The only difficulty was committing to one place and making that final decision,” she explains.

“I already had a British passport and therefore did not need a visa. Apart from the initial research and application process to attend the school preparing for my trip was very straightforward and simple.”

She traveled to Switzerland in August 2010. 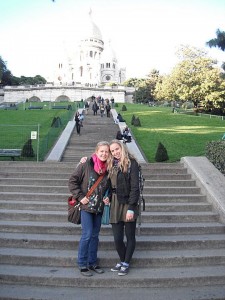 Una said that her limited knowledge of French posed a few challenges for her at first.

“The first few weeks went by very slowly and as I spoke very little French initially I was definitely a little homesick,” she explains. “After this initial adjustment period however, I was able to better integrate myself into the school there and make friends.”

She quickly found her environment offered many opportunities to learn.

“I found that picking up on the language came fairly naturally by simply being immersed in the culture and interacting with students and teachers,” Una says.

“Within a month I could understand French fluently and carry a conversation very easily. This definitely enabled me to move past the ‘culture shock.’”

Having negotiated her biggest hurdle, Una was able to turn her attention to making connections with her fellow students.

She recommends making as many connections as possible with other exchange students and local residents. “It is also important to reach out to local students even if there is an initial language barrier – it makes learning the language a lot easier in the end!”

“Make the most of your time abroad and make a list of places to see and things to do.”

“My class went on a week-long trip to Florence, Italy,” she says. “My experience here was amazing: the food, the art and the people I was with were all part of this. I would love to see more of Italy in the future.”

Studying abroad is a great opportunity to learn more about yourself.

“I’ve spoken with several other individuals who went on exchanges and we were all amazed at how much you learn about yourself and change over the course of the stay,” Una says.

“I learned how to handle unfamiliar and sometimes uncomfortable experiences, from writing math tests in a new language to trying to be polite by eating Roquefort cheese sushi that had been made for me as an attempt to accommodate my vegetarian diet at Christmas.”

Today, she’s studying at the University of British Columbia with plans to explore a career in nutrition and healthcare.

She has fond memories of her travel experience – and she’s ready to explore new destinations in the future. “There is a lot more travelling to do,” she says.

Una is thrilled with her first trip abroad.

“I definitely missed my friends and family at home, but overall my experience was very nice,” she explains. “Studying abroad is a completely unique experience from volunteering or traveling recreationally.”