Adam Curran and Basia Frankiewicz are two students from different schools, on different career paths, who have had very different experiences, yet they share one key thing: They have had life-changing experiences while volunteering with Students Offering Support.

Founded by Greg Overholt in 2006, Students Offering Support (SOS) is a student-led charitable organization dedicated to providing accessible education in developing nations. Since its inception, Student’s Offering Support has raised over $800,000 for sustainable development projects across various rural communities in Latin America. This youth-led organization’s success lies in its unique business model, which raises funds to build schools in Latin America through exam-prep group-review sessions led by volunteers in post-secondary institutions across North America.

Student’s Offering Support’s vision of global, accessible education bridges these two worlds by allowing student volunteers to change the world on a local and international scale; after all, the student volunteers who serve on campus are those who build the development projects. Students Offering Support is not only a social venture or entrepreneurial initiative, but an opportunity for lifelong personal and professional development.

Adam Curran, who first became involved with SOS in 2007, participated in the May 2011 outreach trip to La Nueva La Florida, Guatemala. As the President and Founder of SOS chapter at Queen’s University, Adam was initially inspired to get involved because of SOS’s appealing business model, but he soon realized that the organization was much more than tutoring students while supporting a good cause. 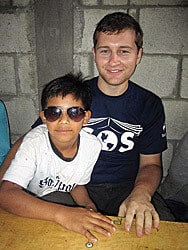 “The same reasons that I got started still apply, but my commitment and desire have certainly changed,” says Adam. “I went from believing that it was a good cause, to being intimately aware of how powerful this model could be, and how many lives it could impact.”

Inspired by the strength and hospitality of the community, Adam mentions a memorable woman he met in Aurora who helped the volunteers transport cement from one location to another. Despite being in Guatemala for only two weeks, the kindness that Adam witnessed – through the dedication of his fellow volunteers, as well as the generosity of the community in La Nueva La Florida – has had a lasting impact on Adam’s view of life.

“All of my experiences with SOS have had a significant impact on my life,” says Adam. “It made me realize how much a group of students can accomplish when they are passionate and willing to make things happen.”

When Adam first met SOS founder, Greg, in 2007, he wanted to become an accountant and pursue his CA. After volunteering with SOS, Adam realized that he truly wanted to go to law school, and is currently pursuing his degree at the University of Toronto.

“While a number of factors went into that decision, I’m sure SOS was a part of it,” says Adam. “It made me a more confident person and helped me realize that if you truly believe in an end-goal, then there is a good chance that you can reach it.”

Basia Frankiewicz, Co-President of Laurier SOS, shares similar sentiments about her trip to San Pedro Columbia, Belize, in August 2011. Basia first joined SOS in 2009 with the intention of expanding her work experience. As a Promotions Executive on the Marketing team, Basia had the opportunity to meet with outreach trip participants and partnering NGOs, who later changed her view on the organization.

“It motivated me to push harder and to keep working hard to get donations,” says Basia. “I wanted to expose the students to the differences they can make by simply attending these Exam-AID sessions – not only in their own marks, but in developing countries.” 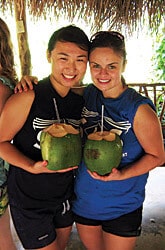 Basia and the group of volunteers in San Pedro Columbia spent two weeks working with the community, helping lay bricks of an alternative high school.

“The volunteers made a huge contribution because their labour allowed us to deduct that from the total budget,” says Lindsay Seegmiller, International Outreach Director of Students Offering Support. “This allowed us to add in two bathrooms with the money we saved by having them go in.”

Like Adam, Basia developed a close connection with the community members during her two weeks there, and continues to harness those relationships through e-mail and phone conversations, even after returning to Canada.

“Who knows where our paths will take us, but I guarantee that I will be close with them for a very long time,” Basia says. “The community was so inspirational – I still feel I haven’t captured how life-changing this entire experience was.”

Basia intends to pursue her career goals in capital markets, but she continues to be deeply involved with charitable work, especially when it comes to the San Pedro Columbia community. She hopes to return there this summer to visit old friends and help them achieve further self-sustainable developments within the community.

With over 100 million children worldwide without access to quality education, the Students Offering Support social initiative aims at breaking the cycle of poverty while providing North American students with hands-on business experience. More importantly, the organization is making a difference in the lives of both the families residing in these communities and the volunteers that devote their time to these developmental projects.

“Having visitors come in and invest their time and emotions into these projects tends to be the most memorable part for these communities,” says Lindsay. “They obviously appreciate the infrastructure itself, but it’s the emotional dedication that volunteers invest into these communities that have some of the biggest impacts on people.”