When Mike Healey decided to enroll in the University of Queensland’s medical program, he wanted to take advantage of any opportunity to travel. And he did just that when he completed his first-year internship in Vanuatu, an island country located northeast of Australia.

Healey, a student originally from Vancouver, said he decided to complete his first year internship in Vanuatu because of his desire to work and provide support in a developing nation.

“As a Canadian medical student studying in Australia, I am not sure how long I will be living in this part of the world, so I felt it was a great opportunity to visit a region of the world that I may never get to see again,” he says. “I believe that at this stage in my medical training, I would be of more use in a developing nation than in developed countries like Canada or Australia. After discussion with a couple of mates that had sailed through this region before, I felt that Vanuatu was the perfect choice.”

And perfect it was. 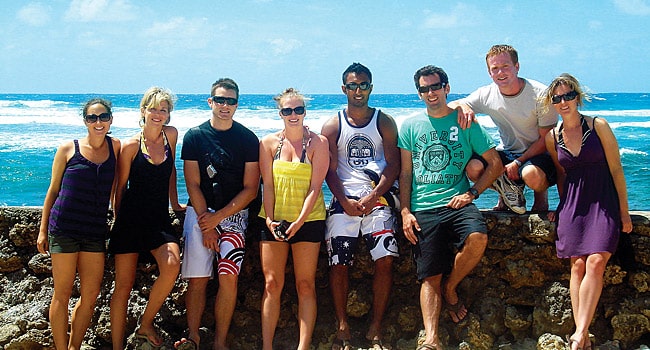 Hospitality for the Hospital

Healey says that he, along with six other Canadian medical students, decided to complete their four-week internship at the Vila Central Hospital in Port Vila, which is located on the Vanuatu island of Efate. But Healey says they wanted to do more than simply travel to the country to get medical experience.

“During our research of the hospital, we read numerous reports that indicated how limited resources were, so we decided as a group to raise money for the hospital as a way of thanking them for taking us on,” Healey explains. To raise money, the group threw a party and ended up collecting more than $1,000 for the hospital.

When Healey first arrived in Vanuatu, he says that its people are what made the country so special to him.

“I have never seen a country where every person that walks past you greets you with a big smile and a hello,” he says. “On several occasions, we would be walking down the street, and people would come running out of their house to ask us how we are enjoying our stay in Vanuatu. They all just appeared so proud that we chose their country to visit and wanted to ensure we were enjoying our stay.”

Healey spent his first two weeks at the Vila Central Hospital working alongside a doctor in the outpatient/emergency ward, and his last two weeks were spent with the surgical team. He says that as first-year medical students, they were nervous during their first few days, but their jitters didn’t last long.

“All the patients we dealt with were very understanding and seemed eager and happy to help us with our training,” he says, adding how the locals called the medical students, ‘Baby Doctors.’

Because not every patient spoke English, Healey says the doctors translated for them, but within a week, Healey was able to pick up enough Bislama to take a history from a patient on his own.

Now back in Australia and preparing for his second year at UQ, Healey says his experience in Vanuatu was unforgettable, and he’s glad he made the decision to go.
“I have always felt it’s important to take any opportunity to travel, witness other cultures and have new life experiences.”