The heart of Europe might not be where you think; the geographers have established that it’s located in the Baltic country Lithuania, which may be deceptively small but is actually an attractive Northern European academic destination for foreign students. Boasting not just plenty of study opportunities, but a dynamic economy and a rich history as well, Lithuania pulls in impressive numbers of international students every semester. As for the most academic local city, nothing beats Kaunas, the provisional capital, which is always swarming with students and exuding a warm and cozy academic atmosphere.

One of the fascinating aspects of Lithuania’s appeal is its geopolitical duality. Western countries see the Baltic state as part of the East, due to the fact that Lithuania had suffered Soviet occupation. However, Russian people consider the country to belong to the Western world. Certainly, the quality of living in Lithuania has become much higher since the fall of the Iron Curtain, and has been rising even more since the country joined the EU in 2004. Regardless, that elusive mixture of the East and the West in one place is evident in Lithuania to this day.

The system of higher education in Lithuania has undergone a lot of positive changes since re-gaining independence in 1991 and joining the EU over a decade later: a variety of new disciplines have been added to the curriculums of universities, Lithuanian researchers joined international networks, new generations of scholars became members in a variety of academic communities. As a result, there has been a certain renewal in research paradigms and a noticeably growing tendency towards an interdisciplinary approach in the teaching of humanities and social sciences. 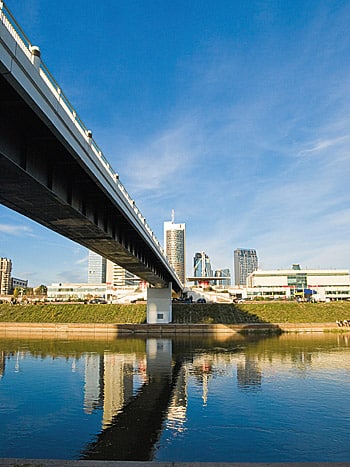 Lithuania is an active participant of the Bologna Process and has made significant changes in its higher education system to accommodate international students and facilitate the conditions of their studies here. Just like many other European countries, Lithuania uses the familiar three-cycle higher education system. The Baltic nation has also implemented the European Credit Transfer System (ECTS) which makes it easy for international students to make their existing qualifications compatible with the national credit system.

All Lithuanian schools of higher education actively participate in various international programmes and develop relations with academic institutions abroad, which serve as the basis for student, teacher and scientist mobility. Almost all Lithuanian institutions of higher education are members of the European exchange programme LLP/Erasmus. Academic exchange programmes are currently carried out in collaboration with numerous countries, including France, Czech Republic, Denmark, Finland, Estonia, Italy, Spain, Japan, South Korea, Latvia, Poland, Brazil, the USA and many others.

The available programmes are divided into 63 study fields, which are in turn grouped into six study areas: the humanities, the arts, the social, physical, biomedical and technological sciences. There are plenty of degree programmes and a variety of courses offered in English here, therefore the language barrier is never a problem. Besides, grants are offered to foreign students who come to Lithuania for studies or research under the sponsorship of the government. Some of the governmental agreements cover travel, insurance, tuition fees and accommodation expenses. Some universities offer scholarships for international students.

Lithuanian academic traditions have deeper roots than those of the country’s neighbors. The first university in the country was founded in 1579, and at that time it was also the first one in the entire region of Eastern Europe. While other higher education schools or universities in Lithuania may not be as old, they also faithfully pursue a direction of their choice, whether it is attention to the exact sciences and in-depth studies of a particular field, or an artes liberales direction offering wide-spanning general education.

This small yet noteworthy country, situated at what could be called a gateway location between the West and the East, certainly has enough to offer for a curious student from any corner of the world. Come and see for yourself, you will soon find that academic communities in Lithuania are friendly and open to everyone.