Finding Paradise and the Perfect Program

It was in St. Kitts, a Caribbean island paradise, that Isaac found a program as unique as the wildlife he would study there. Isaac had known since high school that he wanted to become a veterinarian, though his love for animals began much earlier. But becoming a veterinarian is a  competitive process, and Isaac had his own anxieties regarding the application process. He feared potential rejection and at times struggled with feelings of inadequacy in the face of a demanding and challenging career path. However, others saw the potential where Isaac did not. After graduating with a Bachelor of Science from the University of British Columbia, Isaac volunteered at an animal hospital, and it was here that his mentor suggested an unusual alternative to veterinary school in Canada: the Ross University School of Veterinary Medicine.

The Ross University School of Veterinary Medicine is a North American-accredited school that is situated in Basseterre, the capital of St. Kitts, one of the two Caribbean islands. As fate would have it, the school was hosting an information session a few days after Isaac’s mentor told him about it, and after speaking with recruiters and program alumni, Isaac realised that his hesitations to apply for veterinary school were holding him back from something that could be an incredible, once-in-a-lifetime experience abroad. He reminded himself, “The biggest failure in life is the failure to try,” and with this motto in mind, he applied.

Isaac’s educational journey to the Caribbean began with qualifying interviews, an evaluation of the finances he would need to complete the trip, and the mental preparation any new student will go through at the thought of four years away from home. However, Isaac was determined to take this extraordinary step towards achieving his dream and embarking on a life-changing adventure. After receiving his vaccinations, he was packing his essentials, including four over-sized bottles of sunscreen, when it hit him: He was really moving to the Caribbean. 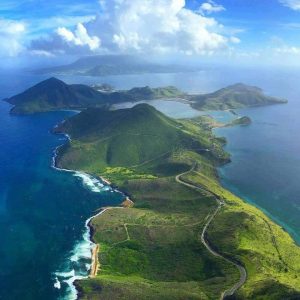 The first thing Isaac noticed once he arrived at Besseterre was the heat.

“I was worried about whether or not I would be able to survive in the weather,” he says.

“The biggest culture shock to me was that the [locals]didn’t seem to mind the heat and humidity. I felt like I was the only one who was challenged by the weather.”

But once acclimated to the heat, Isaac found he had gained a whole new perspective on his Caribbean adventure and what it would mean for his professional and personal development.

“When I [came]to accept the fact that I will always be sweating, I started to appreciate the island at another level. The island was a paradise. Outside of classes, I played beach volleyball, learned to spearfish while snorkeling, went on catamaran trips, and indulged in many of the island cuisines,” he says.

Participating in these activities helped facilitate friendships with other students he’d met in the school dormitories first semester. Living in the dorms gave Isaac a sense of stability and support. Here he was a student. It wasn’t until he moved off campus that he truly recognized that he was a visitor in this country, and he intended to make the most of his time abroad.

Taking classes at Ross University taught Isaac more than just veterinary science and medicine; it taught him valuable life skills, including how to be more adaptable, how to open up to new people, and of course, how to make his own fruit smoothies from the fresh mangos that grew in his backyard.

Isaac learned ways to manage the stress of veterinary school and keep his cool (in ways apart from taking a dip in the Caribbean sea, that is) by being involved in his program and getting to know his peers. As they were all working towards a mutual goal, he found it easy to establish relationships with other aspiring vets, and they met up frequently for study sessions, excursions, and the occasional game of beach volleyball.

Isaac is now just a few months away from graduating. When asked about the experience and if he had any advice for students considering a move like his, Isaac expresses how he only wishes he had applied sooner:

“I regret the number of years I spent drawn back in fear or applying to veterinary school thinking that I was not good enough. Studying abroad has, above all else, given me the confidence that I can achieve anything, even if I were to be put somewhere random on this planet. Now, when I imagine myself in a new country, I no longer think about how I can survive in the new environment. Rather, I anticipate the new friendships and hobbies I’ll make.”