Exploring the world is on most students’ to-do lists, but most of us only take short trips to tourist destinations and never have the opportunity to completely immerse ourselves into the local culture of a foreign country.

But Monica Milowski, a University of British Columbia psychology student who is originally from Winnipeg, decided that she wanted to spend a significant time abroad about a year before she departed for Australia. 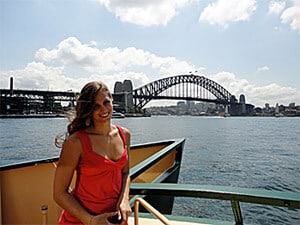 “I thought an experience traveling for a long period of time would be really beneficial and a lot of fun,” she says. “I already loved traveling and I wanted to continue exploring the world.”

To prepare, she took a semester off school to work and save money, and she even lived at home to maximize her savings. Monica had never been to Australia, but she had met a number of Australians on other trips and asked them to help her decide where to go – they recommended the University of New South Wales in Sydney.

She rented a room in a townhouse near the university and went Down Under in late February 2011 to study for 2 semesters. (If that seems weird to you, don’t forget that the seasons in Australia are the opposite of ours here in Canada!)

At first, she found that the students in Australia tended to live at home and go to school with all of their friends, so it was difficult for her to break into those already-established groups of friends. “During my first semester, it was a lot of going out and exploring Sydney with other exchange students,” she says.

Second semester was a much more positive experience than the first, though; she joined a volleyball club and met a whole group of Australians. “Joining the volleyball team was very good for me,” she says. “I found friends and a group to exercise with, and I feel like they are going to be lifelong friends!”

Since Australia is an English-speaking country with a culture very similar to our own, Monica didn’t experience any other difficulties – “I would say the biggest thing I had to overcome was figuring out the slang that Australians use.” Sounds tough, mate!

Monica says studying abroad was an extremely valuable experience for her because it forced her to go out of her comfort zone and meet new people. “I also had the opportunity to experience a new part of the world in a different way, actually living there and experiencing a lifestyle different to my own.”